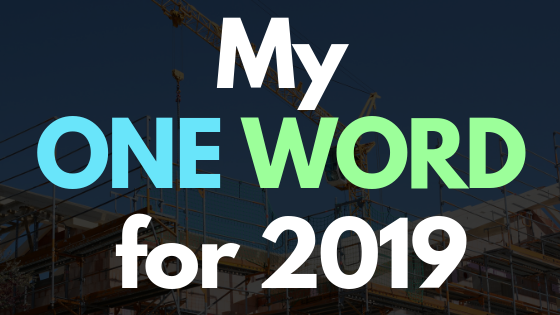 Since the end of 2013, I’ve taken on the task of choosing a guiding word for the upcoming year. The purpose of this is focus. My goal is to keep a word in front of me which will filter my actions and help to inspire my progress. When I started this process, I shared with others and I received varied responses.

“That’s great! I should do that!”
“Hocus Pocus. That’s that affirmation fluff. It doesn’t do anything in real life. Let me know in a year what happened.”
“How does that even work? Do you read it out loud every morning or something?
“Hmmm. Oh ok.”

I was glad for the responses because they told me a bit about who I needed to minimize contact with. Friends and connections with the right kind of energy are critical when you are shifting. And when I began this process, I was in a definite pivot. I was moving from an educational career, through a failed business, and into the next step. What was that next step? I wasn’t 100% sure. But I knew I needed to step.

My ONE WORD History

So, for 2014, I chose the word EXPLOSIVE. My business has exploded…not in a good way…and I needed to reframe quickly. Something big had to happen and I couldn’t just wait for it to happen. Therefore, I needed to focus on creating something explosive. And create I did. I created content. I developed courses. I coached. I did everything I could but my business only inched forward. It wasn’t enough…or so it appeared. So, at the end of 2014, I decided to go back to full-time employment and I was able to get a job with a training company. It wasn’t the explosive year I had envisioned. But, I didn’t realize the foundation was being set.

In 2015, I settled on IMPACT. If I couldn’t explode in business, I wanted to do something meaningful. So, my focus on creating an impact wherever I went and in whatever I did. I was learning to choose service instead of simply chasing the money a business could provide. Yes, I had my family to take care of but there were also some lessons I was learning. I was working full-time and things were going well but I still wasn’t in my power zone. So, that year, I joined Toastmasters. I began volunteering with Junior Achievement. I connected with a volunteer organization in Baltimore to do mock interviews. I volunteered as a board member for the Association for Talent Development. There was a lot happening…and I was learning about impact. But then, in September, the company I was working for lost a huge contract and had to let some people go. OUCH! What now?

I called up a few old clients and began to connect. Within a few weeks, I was able to begin training again and teaching some classes. It was now the end of 2015 and time to choose my word for 2016. My word was RELATIONSHIP. Some of the friendships I had made online and the relationships I’d formed during the “EXPLOSIVE” year were now coming back around in the form of training gigs and one-offs.

I forgot to mention one important detail. During the “EXPLOSIVE” year, I kept being asked one question in various forms. “Are you a speaking?” or “Are you a public speaker?”

At that point, the answer was no. But after joining Toastmasters, at the end of 2015, I began to sniff around the National Speakers Association. They had an open Facebook group and a tweetchat every Tuesday. I decided to act like a member and joined the Facebook group. I realized later they had an actual members-only group, but no matter. I was IN! I attended the tweetchats regularly and began to form some relationships (my 2016 word, remember). Some kind members of the group began to pour into me without any expectation. So, by the end of 2016, I’d decided to actually join the National Speakers Association. It was during this year that I saw another speaker whom I’d admired, Cheryl Wood, post about her decision to join the National Speakers Association as well. As I received these various acts of kindness and saw some of my contemporaries making some of their own growth moves, I knew it was time for me as well. But, I couldn’t play the sit-back-and-wait game anymore. It was time to make some bold steps.

My word for 2017 was BOLD. It was now time to move from my current level to one where I was uncomfortable. It was time to make some decisions about my business and its direction. I needed to invest in myself on a different level. So, I joined the National Speakers Association and decided to attend the Influence convention in Orlando, Florida that summer. I’ve never been scared of life but the convention helped me realize I was still operating from fear. The structures I’d built up around myself to function were built from fear knowledge and I needed to re-adjust. This calibration couldn’t be done on my own. I’d already built three businesses and blown one up on my own so, the formula I’d used to get to that point would no longer work for this new level. Now, I needed to be around million dollar speakers and others who had exceeded my level and had quite a few years of success behind them. In order to open up my opportunity, I could no longer operate according to standard procedure. I needed different.

So, in 2018, I made up a word…COLLABO-GATION. This meant the protocol of doing everything on my own could no longer work. I shut down some of the events I was doing on my own and now began a process of reset. I eliminated a lot of my social media efforts and hired an assistant to take some of the load. My actions had to be intentional. Any results achieved now had to be through collaborative or delegated efforts. This was hard because it meant I had to do some things differently. Now, I had to better utilize project management and planning tools. I had to draft operating and onboarding procedures. My role was shifting from simply executing into strategic leadership.

It’s been a great year. I’ve formed some great partnerships and business relationships. I’ve been blessed to receive some awards and celebrate some great opportunities. Life is good! Not easy, but I love it!

As we approach the end of 2018, I see the journey more clearly. All of it makes sense. The lessons learned will fuel my growth going forward. I had to tear down some of the fear-based structures and now it is time to BUILD.

I wrote this ONE WORD post a bit differently this year for a few reasons:

1. Sometimes we see people online or in person and we don’t really know the journey because everything looks ok. I wanted to share some of mine so those who are struggling will know that as long as they don’t quit, things will turn out fine.

2. I needed to be able to look back in a real way in order to gain some fuel for the future.

3. I wanted to encourage you to focus on your word in a very thoughtful way.

—–
If you need help with strategizing for 2019, I’m offering 3 sessions in December to help you lay out your roadmap. For the last 3 years, I’ve offered these sessions and I’ve found it is helpful to have some focused time to sit and work on your life plan with others who are driven and focused on success. Register here for one of the virtual 3-hour roadmap sessions: http://www.your2019roadmap.com