I love the fact that life has different phases and seasons.  Some of them are difficult and some of them are not as difficult.  I know that when I’m going through easy times, more difficult ones are on their way.  But, I relish the difficult times because I know that there is something good coming at some point.  It’s sort of like expecting a birthday present.  Of course, I’m aware that not everyone sees it the same way I do.  That’s just my perspective.  For some people, it’s hard, harder, hardest, bad, worse, worst.  But, that really comes down to a matter of perspective.

Right now, my perspective is one of completion.  About 8 months ago, I posted a status on Facebook that said something to the effect of “Did you know that it takes about 28 days to form a new habit?  What are you going to change in YOUR life beginning today?”  The habit forming idea was fresh in my mind because I had recently read “The Power of Habit” by Charles Duhigg.

I had a a tremendous response to the question.  So, I committed to forming a community and accountability group if people were willing to commit to 28 days.  We started off with a group of 25 people and they stuck it through.  There were some parameters that had to be followed.  Perform, Post, Prove.  Yes, you had to perform your activity, post about it and prove daily in a video, picture or some other creative means.  This was not always easy for some people.  But, they pushed through. 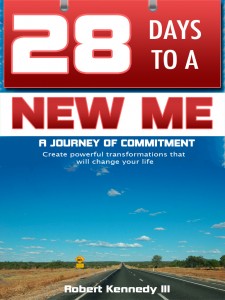 Today marks the release of the self-published endeavor, 28 Days To A New Me: A Journey of Commitment.  The release signifies the completion of the writing project.  But, it also signifies the beginning of the next phase of marketing, sharing, strategizing, planning, executing and generally watching this phase of the story unfold.  Because its a new journey, it’s one that I will savor.

Then I realized, that in the same way that I had been telling people in the 28 Days groups over the last few months that they didn’t have to be perfect (just persistent), I didn’t have to be either.  I had set a target and reached that first destination.  The cool thing about it is that there is no one that says I can’t set a new destination.  There is no one that says I can’t do it again and do it bigger and better.  And, that is JUST what the plan is.  I already have two other ideas on the brain.  But right now, I will enjoy the fact that this first part of journey has ended and a new one has begun.

What are you committed to?  Where are you in your journey? Leave your answers in the comments below!

28 Days To A New Me is available on Amazon!