2 Words To Delete From Your Communication 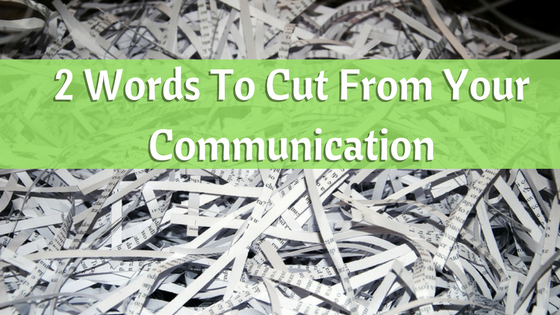 “Sticks and stones may break my bones but words will never hurt me.”
What a crock!  I used to hear this statement all the time when I was in elementary school.   I get the idea.  Words don’t physically cause damage.  But, words are ridiculously powerfully and always last longer than any physical damage could.  Words are so powerful that they last longer than the lifetime of anyone who utters them.  Words can affect generations.  The saying was attributed to Ghandi, “an eye for an eye makes the whole world blind.”  It is still quoted when we refer to non-violence.

Words create our reality and place our thoughts into the ether.  Words help solidify our intentions.  Words can create trust or distrust.  Words can motivate or they can deflate.  But, many of us are still careless with our words.  We sling them like old food to the trash.  We throw them without much forethought about their destination or direction.  Now, wait a minute…I know what you’re thinking.  “Not me, I think about my words and I’m very careful about what I say.”  That may be true.  But, words can be innocuous.  It might appear that I’m referring to words that are intended to hurt others.   However, simple words can determine HOW you proceed and how your intent is received.
There are are 2 words in particular that shift things when I hear them…and not in a good way.  The first is:
TRY
The meaning is simple enough.  It can be replaced by the word, “attempt”.  When I hear the word ‘try’, I hear it in sentences such as:
“I’m going to try my best.”
“I’m going to try to make it to your event.”
“I’m going to try to make that happen”
“Try your best.”
Fairly innocent statements, right?  They just happen to have an out clause built in.  Whenever I hear the word ‘try’ used, I immediately think of the outcome being, “Well, I tried but it just didn’t happen.”
‘Try’ does not indicate your best efforts, intention and focus.  It doesn’t come from a position of strength and determination.  Think about the difference between the following two sentences.
“I’m trying to start a business.”
versus
“I am starting a business.”
There is a definitive nature to the second.  Removing the ‘try’ increases the appearance of confidence in the sender as well as to the receiver.  The statement now indicates what you are DOING instead of what you are attempting to do if the world deals you the right cards.
Eliminating the word, “try” is not an easy task.  We have grown up with other anecdotes such as ‘If at first you don’t succeed, try and try again’ which keep it in front of us.  However, intentionally choosing our words, the ones we say as well as think, is a courageous, conscious act which indicates your determination to create your life.
As Yoda says, “Do or do not.  There is no try.”
The second word to eliminate?
SHOULD
“We should try to do that.”
“It should be happening any time now.”
“You should have been there.”
“You should do better.”
The word “should” inherently denotes that something has passed.  It is usually indicates something negative has or has not happened.  Something over which you now have no control has taken place.  It often indicates a command to change instead of indicating possibility.  Think about ‘could’ versus ‘should’.
Your words determine the confidence with which you stand, the focus with which you proceed and the way in which you are perceived.
Life has no guarantees.  But, proceeding as if you have won, undeterred by the final result is the mark of success.  Create possibility and simply DO!
Posted inBusiness Communication Relationship Building
Tagsconversation vocabulary