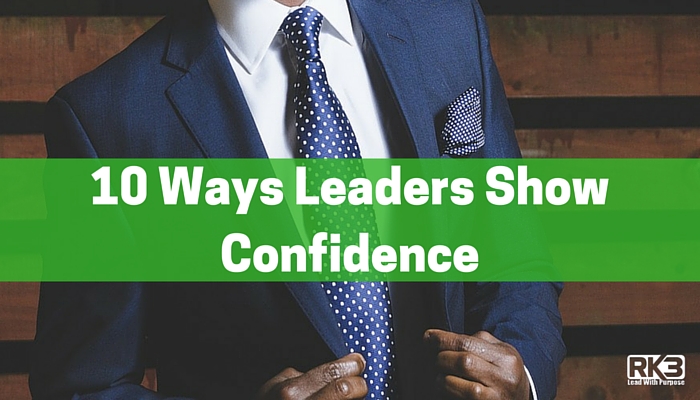 10 Ways That Leaders Can Show Confidence

They have the mic and they are up in the front of the room so they MUST be confident.  They are guiding everyone else to the goal so they MUST be confident.  They have the position and the title so they MUST be confident.  Hmmm.  Those may be actual thoughts but they are not always the actual truth.  The truth is leaders often come across as unsure, uncertain and yes, even untrustworthy.  This is usually clear to those they lead.  Internally, that leader is also fighting a continual confidence battle and wondering how it looks on the outside.  Yet, they don’t usually ask the questions.  But, if were a fly on the wall at the water cooler, the break room or the company picnic (well, if there are walls at picnics), they would hear the answers.  People want to believe their leaders.  People want their leaders to be confident.  People want to be able to rally behind and with someone who appears confident, charismatic and courageous.  A study from the London Business School notes that people expect their leaders to be excited.  Excitement indicates confidence and people rally behind a confident leader.  People rally behind someone who is ALL IN!

Here are 10 things to appear and be more confident:

1. Dress the part
We recently lost a music icon in the person of Prince Rogers Nelson. One of the things that people always said about him was that he had this strut every time he came out on stage. He didn’t play a note and he didn’t say a word but people paid attention. He appeared confident simply by what he wore and how he wore it. By contrast, I’ve seen “leaders”, or maybe I should say people in leadership positions, who were dressed like they didn’t want to be there. And it showed. In the military, the general is recognized by the uniform. Those who were leading the troops into battle wore the uniform of a leader. When you lead, you don’t necessarily need stripes, hats and tags to stand out. But, you should look like to mean BUSINESS! You will FEEL like you do also.

2. Stand up tall
Have you ever seen a speaker or leader slouching in a meeting? The slouch diminishes your stature before you have said a word. Your posture says that you trust yourself and you believe the words that are about to come out of your mouth. Amy Cuddy talks about Power Poses in her TED Talk. Your body language shapes not only who you are and how you feel but how people see you. To be seen as confident, STAND UP.

3. Exercise
There’s nothing worse than someone standing up and telling you to work hard and do your best when how they carry themselves clearly tells you otherwise. This is not a discussion on weight or western media’s norms for sexiness. This is simply a call to take care of yourself. When you exercise, you are brighter, more energetic, you breathe easier, you glow. Exercise tightens, tones and allows you to have that Prince strut we spoke about earlier. Exercise doesn’t only show on the outside. It allows you to know mentally that you are doing what it takes to take care of your body. You are not just telling people to be better…you’re DOING it!

4. Celebrate your achievements
Yes, as a leader, you often get credit for the efforts of others. However, you are coordinating, motivating, inspiring, developing, building, visioning, creating, providing. That is hard work and you need to celebrate it. Don’t let anyone diminish what you do. Don’t laud it over anyone’s head but it’s a good thing to celebrate your achievements and your team’s achievements. Celebrate and celebrate out loud. That gives you the confidence to push towards the next challenge.

5. Celebrate others & compliment them
A confident person celebrates others because they are not minimized by their accomplishments. Celebrate other people daily. Compliment them and let them know that you are genuinely happy for their successes. Spur them on to even greater success. They will know that you are not competing for the spotlight. You will be seen confident and secure in your own space.

6. Speak with passion
Passion is sexy. Passion is inspiring. When you are passionate, it shows the level of buy-in you have for your idea and how far you are willing to go to ensure it’s success. You are not concerned about failure. You are concerned about meeting a need and accomplishing a goal. Speak like you believe with every fiber and cell that what you are saying is important whether everyone else believes you or not. Be a one-person pep rally for your ideas.

7. Smile
Smile. Not the weak smile that looks like you are trying to hide the fact that you are nervous. I’m talking about the broad smile that says the world is brighter when you’re in it. It IS! Believe that you have a purpose and that you have been given a mission, an important one. You haven’t been just given a title. You’re on assignment to make the world better and you absolutely know that it’s going to happen. Smile.

8. Own your stuff
So what! You’re not perfect. No one is. You’ve failed more times than you can count. But guess what? Your STUFF is your STORY! That’s what makes you uniquely you. It also makes you uniquely positioned to share a victory with someone else who needs it. OWN it! OWN your greatness! OWN your space! OWN your place! Strut!

9. Be vulnerable
You’re going to mess up. It’s what happens in life. When you do, don’t hide it. People notice when leaders are confident enough to share their foibles. This lets them know that it’s ok to have some flaws. Share when you are working hard but it didn’t come out like you expected. Share when you made a bad decision or two. Share when you received grace and had a success that truly wasn’t yours. When you show vulnerability, you become less attached to the immediate failure and focus more on the future possibility.

10. Listen intently
Speaking passionately is sexy. But what is even more important is the ability to shut up and listen. Listen not only allows you to understand the perspectives of others, but also their heart and what drives them. When you an listen without feeling like you MUST interject, you are sharing a confidence that calms and builds trust.

Remember, leading is not necessarily about having a group of people following you around.  It may simply be about being willing to be the first to follow an idea or dream.  It is about being courageous.  It is about taking a step of faith.

Try taking on one of the above ideas to increase your confidence and your leadership capacity.