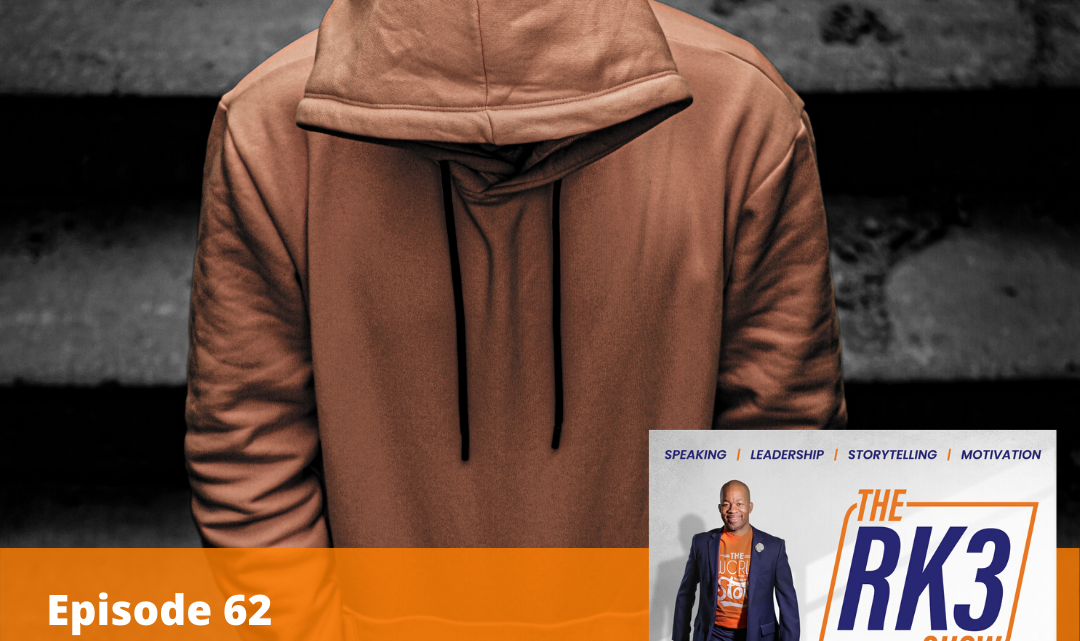 This is The RK3 Show Episode Number 62 and today’s episode is quite a bit different. It’s what I call one of those “From the Heart” episodes. Nothing is scripted, no notes, no show intro, no music. No nothing. It’s just real raw from the heart.

I felt the need to do it this way today because of what’s happening and in our country. We have a lot of our guest episodes already recorded and in the bucket – we don’t have any shortage of episodes. But it just felt different.

If you don’t know what’s happening in our country, it’s that a gentleman by the name of George Floyd was killed by an officer in Minnesota last week May 25th and now our country’s at a place where there are protests. Dnd on top of the protests – most of which are peaceful – there are riots, there’s looting. All of that is kind of par for the course as far as most major protests go, but not for the reason that we would think.

I remember living in the state of Massachusetts when the Red Sox won the World Series in 2004 after nearly a century of “bad luck”. When that happened, there was crazy happening in Boston. People were jumping on top of cars before, flipping police cruisers. Windows were being broken out, stores being broken into – all sorts of crazy happening.

Where I live now in the state of Maryland, when the Freddie Gray situation happened, there was a lot of those protesting but there was also rioting and crazy and all sorts of different things happening in the in the state. And at that point, people were referred to as thugs. People are referred to as criminals in a general way even before considering what they were fighting or what was going on.

Because of the existence of footage cellphone cameras, smartphones, and the ability to record, there are a lot of different things that are happening that our mainstream media are not reporting or picking up on.

There are groups that are not related to the protesters that are inciting violence. These people are referred to as “provocateurs” or in short, troublemakers.

They’re going in and being manipulative and they’re taking advantage of a situation to incite stuff that isn’t necessary because they know that the certain group of people are going to be blamed.

Amy Cooper and the Bird Watcher

Last week, when all this was starting to take place. I was in this place where I didn’t know what to say. But I had a raw thought come into my mind.

I listened to the story of this young lady in the park that was being asked by a man to leash her dog. She was in a dog park and in an area where dogs needed to be leashed and he simply asked her to do what was required in that area because he was bird watching. And she told him that she was going to call the police and tell them she was being threatened by an African-American man, and she did just that.

I’ll share with you one of my fears. I don’t like snakes. If I’m walking down the street and I see a snake and I see that that snake is coiled up and ready to strike, I’m not going to stand there and say “oh my gosh, let me call someone to get rid of the snake.” Im running!’m not going to wait to be bitten or struck then figure out whether it’s a venomous snake or not. I’m getting out of there.

I don’t understand why someone who says that they feel threatened would then stand there. And call 911 to say that “I’m being threatened and I feel scared because an African-American man is threatening me.” This is NOT FEAR. That’s ENTITLEMENT. It’s PRIVILEGE. It’s WEAPONIZING RACE.

Then what made it worse for me is that for some people, they kind of felt that she did the right thing. She apologized – “I’m not racist. I apologize.”

You may not be explicitly racist however, your INHERENT IMPLICIT BEHAVIOR makes it clear that you consciously or unconsciously view a group of people in a certain way.

My response to that apology as a human being, as a believer, as a Christian is that I forgive you, but I do not accept your apology. I do not accept your apology because there was no statement of changing the behavior. There was no statement of recognizing the incorrectness/inappropriateness of your behavior. You just didn’t want to be thought about in a certain way going forward.

The callousness of our society is so much so that even when being recorded, we believe somewhere in our heart that our behavior is warranted, we are justified, and we’re going to be able to get away with it. We may have a difficult moment. We may be called out but society, history, leadership, the laws – everything is on our side so our behavior is justified. That is the very definition of privilege.

How Can We Make Change Happen?

Looters are manipulators – people who simply want to get some stuff for free and are using and taking advantage of the love of the heightened emotions in a certain time and place. That’s criminal – bottom line.

Rioters are not necessarily in the same place with looters. However, the issue at hand is that that they’re different than than protesters.

As a Christian, a biblical example of when when Jesus went into the temple and he started to turn over tables and and and break things down because the there they were disrespecting what the temple stood for. We started to turn it into a marketplace.

Profit and greed became paramount and he went in and he was turning over tables. He was a rioter in that in that circumstance. Was he a looter? No, because he wasn’t taking the stuff that was there.

Was he protesting? Yeah, he was protesting. But he was also taking it a step further. And to be quite frank, in some cases when you’re not being listened to, when you’re unheard, riots take place.

Where Do We Go From Here?

But what is it that we do? Where do we go from here? What what do we do? I dont have the full or complete answer. What I do know is that sorry or an apology is no longer enough.

My desire is that we break down and we reject the system that creates this. I know that’s a hard thing and it may be an impossible thing. It’s a huge undertaking. And maybe it’s something that is not even feasible right at this moment.

What is feasible is for us, together – I call on my European friends, brothers, and sisters to begin to intentionally look inward. And determine what is it that you can do to help provide opportunity to make a difference and to look seriously at the implied or unconscious behaviors.

Take on the action of questioning yourself everyday step out of your comfort zone. Look around you if you recognize that your circle is is homogeneous. If your circle only consists of a specific group of people, how can you step out of your comfort zone to reach out to someone else? To just form a real relationship and then begin standing up for them.