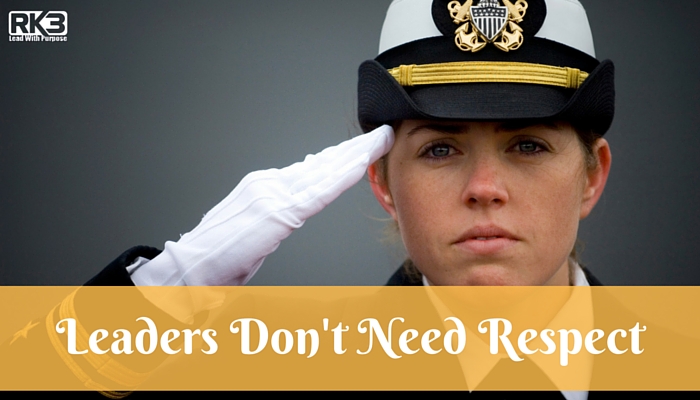 We were speaking about what went wrong and somehow we got to the R word.  We were trying to sift through why the tension existed and what could be done about it.  There was frustration, little eye contact, and tons of arm flailing but not much progress was being made.  That’s when she said, “you’ve got to earn my respect.”  Talk about a dagger in the middle of the conversation.  I was doing my best to try to pull the team together but one of the team leaders was telling me that I didn’t have her respect.

That stung a bit!  But, it’s what happens when you choose leadership…sometimes you get stung!  I chewed on her words for a few moments and then I said, “I disagree.  Respect is given.  Respect is the polite thing to do.  You simply determine whether you will give respect and I don’t really need to do anything.”  Of course, she disagreed.  But, I went on to give a few examples.

#2 – If you are in an auditorium and there is a speaker at the podium, the people in the audience listen simply because there is a speaker.  They don’t wait to see if he/she earns their ear or not.  They simply listen because he/she is the speaker and at the podium.  Should they choose to talk while the speaker is speaking, this person is deemed to be disrespectful.  Listening when someone speaks is RESPECT.

#3 – If I walk in to a room where you are and I say, “hello,”, you respond in kind.  Do you wait to see if I am deserving of a return hello?  No, you say hello simply out of RESPECT or some might say COURTESY.

But, she did have a point.  While I didn’t need her respect in order to lead, I didn’t have something that might have even been more important…her TRUST.

Leaders are leaders whether by title or by action.  In both cases, they are often respected for that reason alone.  But, respect doesn’t ensure greatness or even agreement.  Respect may allow access to certain privileges but it doesn’t mean that your team will follow along.  Respect might give you their attention but it doesn’t guarantee their action.

Respect is good and should be given but true leaders don’t really “NEED” it nor should they seek it.  Instead, actively and intentionally seek to build TRUST.  Then the respect will be there automatically.