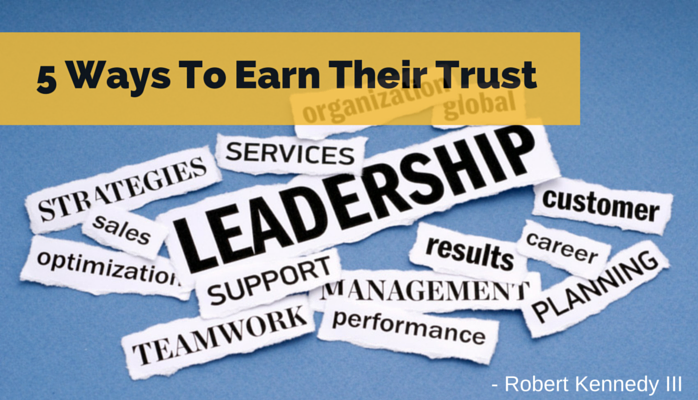 5 Ways To Gain Trust As A Leader

I was leading one team and she was leading the other. We functioned a bit differently but come game time, we had to work together. She led her team but with the way that things were set up, she and her team had to follow my lead. It was a tough situation because I was the new guy. They had been working on departmental improvements for quite some time and along I come, ready to change the world.

I didn’t do anything earth shattering. I didn’t shift the department methodologies in any big way at first. But, my very presence was a challenge because of all of the effort they had gone through to make changes. I was simply a new element being introduced into the pot and they thought that I came with the intent to take over.

Well, as you can imagine, there was constant clashing. One day, things became so heated that she and I had a pretty heated discussion right in the front of the meeting room. Yep, RIGHT after the big meeting. It got a bit nasty and she said one thing that stuck. I said that we had to trust each other and her response was that she didn’t trust me. Wow! Talk about a dagger! That ‘T’ word will put a strain on ANY relationship. If your personal, business or casual relationship doesn’t have the ‘T’ word, then you are going to have a pretty hard time going anywhere.

We had a conversation later on and I said something else that caused her to lash out at me. I said, “we may not always like each other but we’ve got to respect each other.” Her response? “Respect is earned. You’ve got to earn my respect.”

Respect is simply given. Trust is earned. You give the president respect simply because he has that title. But he has to earn your trust with his actions. I can work with that. Let’s begin by simply showing respect to each other and then we can work towards trust. Deal?”

Deal! We had an agreement. Now, I had to figure out how to implement it.

Here are the basics of what I did.

1. Communication – We both had responsibilities. Now, I determined that I was going to state what I would do and then simply DO IT. Ground breaking. Say what you’ll do and then do what you said. But so many leaders don’t do this. Clarity, being above board, being open, honest and transparent are critical. But, after that, you still must do what you said. That’s your closer. That’s the clincher. Things come full circle and you close the integrity loop when you do this. But life happens and you are not always able to do what you say. In those cases, you communicate that you won’t be able to and when you will be able to complete it. Don’t let them come to you. You get to them first because it’s critical for them to know that it was on your mind and your best efforts were directed towards honoring your word with them. (Check out this article in the Ivey Business Journal on Communication and it’s value in building trust)

2. Consistency – I communicated but I also had to know that this wasn’t an overnight fix. I had to continue communicating and acting over a period of time. If I asked for a meeting, I had to be the first one there. If I messed up, I had to say that I was sorry, ask for forgiveness and move on. If I started an initiative, I had to be persistent and consistent no matter who was on board. People were looking now and while a misstep here or there was tolerated, what they expected most was alignment and consistency. I couldn’t quit doing it just because it was hard or because everyone wasn’t excited just yet. It was going to take time and I had to be consistent.

3. Action without expectation – I had to act without expecting that they would do the same as I did. When one of the guys on the team had a baby (well, his wife did), we made sure to give them flowers and a token of appreciation. But, I couldn’t arrange that with the expectation that he was going to do the same or give back in some extraordinary way. I just had to do it because…well…I wanted to. I had to lead without expecting that they were going to follow. They often did. But, I couldn’t stop leading when they didn’t. I had to continue acting with the belief that it was all going to work out in the end. If leaders act only with the expectation that others will reciprocate, then they are not acting from a place of authenticity. Well, it might be truly who they are but it’s not the authenticity that inspires. Authenticity that inspires does so because it is fed internally. It doesn’t need outside motivators. It is fed by passion, desire and a hunger for growth. It is fed when you act without expecting a return on investment.[Tweet “Authentic #leadership is fed by passion and a hunger for growth. – RK3”]

My gosh, I just love how dedicated you are. You show up early to get things moving. That’s amazing. Thank you.

You know what, most people wouldn’t do what you are doing right now. Thank you.

or a text message that said,

Hey, just reaching out to let you know that I appreciate you. Thanks for pulling the team together last week. We had an awesome meeting.

5. Casual Conversation – Business conversations can be tough and business ALL THE TIME is even tougher. Find out what people are interested in and talk about THAT sometimes. So, I found myself talking about the Ravens and the Redskins. Ughhhh, I grew up in the Bronx. Let’s talk about the Yankees, Jets, Knicks, Islanders. Am I right? The point is that finding out about what your team members like, what drives them, what they enjoy is critical. Business can be stressful. So, if that is your only point of connection, then your relationship will ALWAYS be one sided. Honestly, do you fully trust people when the relationship is one sided? I know I don’t. It’s why we don’t really trust used car salesmen. (I was going to say “no offense” but you wouldn’t really believe me). Getting back to the point, find other touch points where you can relate as people who are multi-faceted and interesting instead of simply boss to worker, colleagues or exec to manager.

What are you doing to build TRUST with your team? I’d love to read your comments.