5 Things That Could Possibly Ruin Your Valentine’s Day 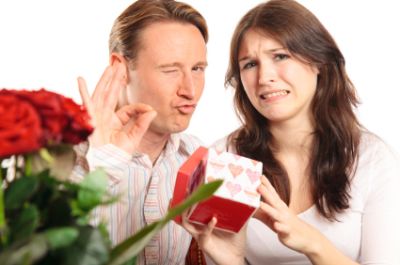 It’s that day again, yes, the one where you see red!  Red boxes of chocolates, red bows, red ribbons….NO not Christmas.  Valentine’s Day!  I’ve read and heard about the history of Saint Valentine and wonder how this has become a worldwide holiday.  Seems like its been some time since we have had any “holidays” invented.  I mean, what exactly does a guy have to do to get a day named after him around here?  Well, it’s one thing to be memorable for doing something great.  But, its quite special to be remembered for ruining the day.  So, here are some things you probably don’t want to do:

1.  Forget
Now, this is probably PRETTY hard to do with the volume of commercials by JARED and Kay Jewelers.  But, there are people who do.  Bad move.  My friend shot me a story of a guy who forgot Valentine’s Day and came home, ate dinner, then sat to watch TV.  When he went up to bed, his wife was sitting there with an especially icy look on her face.  He asked her, “What did I do?”  Her very terse response was, “All I am saying now is that there had better be something in the driveway tomorrow that goes from zero to 200 in 6 seconds!”  The next day, she came home and found a box in the driveway.  Upon opening it, she found…..a bathroom scale.  The guy has not been seen since. 2. Give A Gift With Someone Else’s Name on It
Now, if you are single, this can probably turn out bad. But, you may be able to play it off a bit by claiming that Nicole is actually your sister’s middle name and you just happened to write the wrong name. If you are married, this is probably going to get you at least 14 weeks on the couch. Please be sure to check and double check the card before giving it to your spouse.

3. Call Your Single Friends to Watch The Kids While You and Yours Go Out
Well, this may not ruin your day totally. But, as one friend of mine pointed out to me on Facebook, Valentine’s Day is also known as Singles Awareness day. So, let’s just say that some might be a tad bothered by you assuming that they have nothing else to do except watch your seed! Definitely do not drop your kids off at Chuck E Cheese’s then ask your single friend to come pick them up. The leaving part of that doesn’t usually work well for parents, much less someone who can’t really effectively bribe them.

4. Call An Ex To Watch The Kids While You and Yours Go Out
No need to tell a story right here. If you have done this or are considering it, then your eyes are probably not still in their properly functioning place anyway.

5. Work Late
You should probably accept being fired before you attempt to do this one. The small hints that you have been getting for the past 5.5 weeks probably indicate that this is important even if he/she says that it’s no big deal. If you are ok with sleeping in bed with ice cubes, then this might not be so bad.

Now that you have a few rules to live by, have a Happy Valentine’s Day.