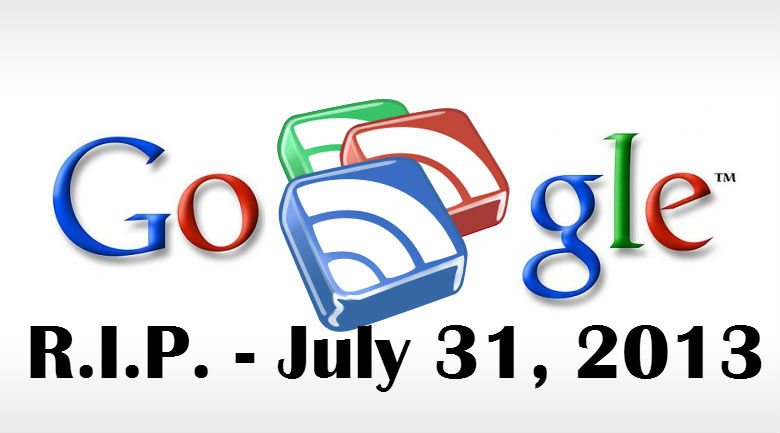 So, Google dropped a bomb on us!  I suppose everything has an end of life.  But, it was a shock to the system when Google announced that they would be retiring Google Reader in July.  It was a shock to me because I had only recently began using it again.  I used to read all of my RSS feeds through Apple Mail.  But, once I stopped using Apple Mail (I use Mailplane because most of my email is gmail or Google Apps based), I went searching for a reader that would fit my needs.  I realized after some time that a desktop reader just wasn’t going to work for me.  Since I use google for my email, my calendar and many other things anyway, Google Reader was an easy choice.

I have just recently returned to blogging, so keeping up with news and other blogs is a must.  I have tried and used Flipboard and Zite on my iPad and they are awesome.  StumbleUpon is great as a way to grab new and even random information from the web.  But, neither Flipboard nor Zite have web apps, at least not that I am aware of.  So, I used Google Reader also because I could get it from anywhere.  And now, *sniff sniff*, its going away.  Oh for sooth, just when I began to love thee!  OK, enough dramatics and on to the reasons.

Once Google announced its intended rss homicide plans, I immediately began to look for a replacement.  Yeah, I know I have until July but, I am an early adopter.  I can’t help it.  I checked out:

1. Newsblur – Well, I didn’t actually get to check it out because the site kept taking a while to load and then crashing.  Not sure if this was because of the oodles of people fleeing the scene of the Google crime or not.  The site loaded and it even looked like it was going to be cool, but it crashed upon me trying to enter a login and create an account.

2. Netvibes – Started to login but it was a little more complex than I wanted.  There is a hefty corporate pricing tag which indicated to me that it did quite a bit more than I was looking for

4. Old Reader – Looked decent but didn’t have a mobile app.

5. Skimr – A bit more minimalist than I would like.

Now for my reasons for Feedly.

1.  It’s pretty.  I like pretty.  I love things that look good.  Not necessarily with a bunch of bells and whistles.  They just look nice.

3.  Upgrades. Feedly currently relies on Google Reader’s API which allows for easy sync.  However, they are already working on their own backend (Normandy) which will allow seamless transition once the Google Reader demise is complete.

4. It has mobile versions (iOS, Android, Kindle) – YES!!  I will be consuming information on the go quite often.  So, this is a MUST have.  I may not be traveling always, but i may just feel like being in my living room instead of my office.  iPad works best here.

5. Keyboard Shortcuts – I’m not a big user of shortcuts, just yet.  But there are people who swear by them.  So, this is an important reason to list. Besides, I might begin to try them as I write more.

Digg has announced that they are coming soon with a reader of their own.  I’ll wait to see what happens there…..hence the ‘for now’ in my title.

What reader do you use currently?  Are you making a switch? Do you even USE an RSS reader? Leave your answer in the comments.